← more from
SATELLITE ERA
Get fresh music recommendations delivered to your inbox every Friday.
We've updated our Terms of Use. You can review the changes here. 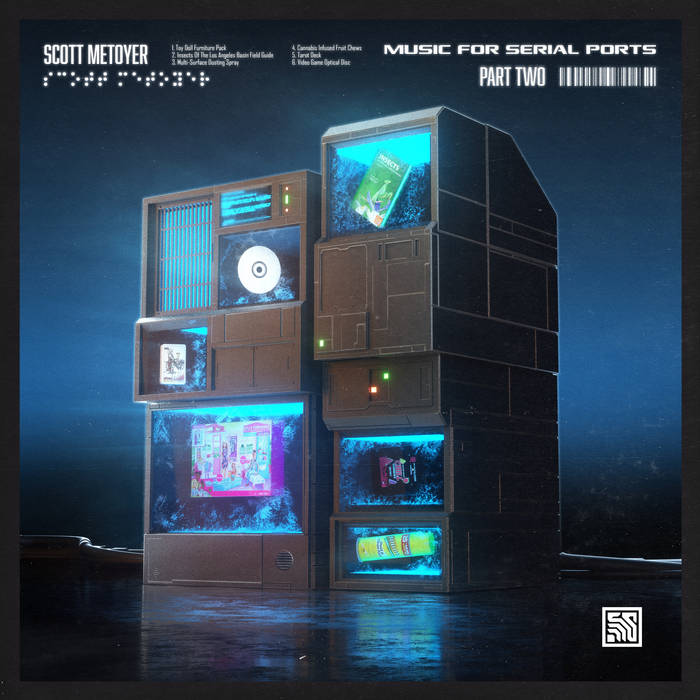 Out now on all major platforms: smarturl.it/3r63u3

As our exploration of the internet-spawned electronic music sphere continues, we find ourselves constantly searching for new artists that push production passed their digital audio workstations - it was inevitable that we would cross paths with Southern California-based creator Scott Metoyer. Using custom-built controllers, modular synthesizers, and algorithmic processes, he distinctively combines a tangible, analog world with the benefits of boundless digitalism.

The title of Metoyer's latest project "Music For Serial Ports" may seem like a clever riff on Brian Eno's ambient masterpiece "Music For Airports," yet it holds a much deeper meaning. Awakening the hidden symphonies surrounding us, the project takes raw data from barcodes on household products and transform it all into an audible medium. Common necessities, often overlooked as items on a shopping list, come to life as artifacts from a society riddled with unethical consumption.

"Music For Serial Ports" was created using algorithmic software made specifically for the project, written entirely in Node.js by Metoyer himself. It processes input from a barcode scanner and uses the raw data as a “seed” to make sets of generative MIDI instrument tracks, control changes, musical scales, master tempo, time signatures, and other parameters needed to create a musical piece. The output of the software is a MIDI file containing a final “sculpture” built directly from the barcode itself - it is then imported into a DAW where voices are assigned to the individual tracks and all other data is properly routed.

Each song is produced to be as close to said barcode data as possible, all while still sounding musically interesting. Metoyer does this by setting base limitations to the composition, which challenges his own written software and improvisational skills. No notes are added to each sequence - only removing or rearranging is allowed. None of a song’s data aside from this is edited, leaving parameters randomly set from each object unchanged. Only Native Instruments FM8 is used to source multiple voices into each track - in the spirit of the DX7 used extensively by Eno.

Ever wondered what a bag of chips or random container in a medicine cabinet would sound like if it could write music? The names of each song are the actual physical objects that were scanned to make the MIDI “sculptures.” A tarot deck sounds as mysterious as one would imagine - a bottle of isopropyl alcohol sonically intoxicates the listener when left open. Suddenly, sounds from the kitchen, bathroom, and living room are bouncing against each wall of a retrofuturistic home. “Music For Serial Ports” also strives to tell a visual story - every detail, from the Satellite Era-branded products to the time capsule machine that locks them away, plays a role in the narrative.

Metoyer’s “Music For Serial Ports” may not have reinvented the wheel as far as algorithmic production goes, but it certainly has tapped into its own universe. Here, life has been given to each data-filled edge - every inanimate object has the ability to conduct an orchestra of its own. Among this project, there is clear imagery of rustic, worn items that will outlive humanity and dive gracefully into the future, ready to be discovered by the unknown.

In an effort to share his creative process, Metoyer has made the software open-source and published it on GitHub, so anyone can create generative music derived from barcode scans. This includes the application source code, barcode images, log file outputs, and other artifacts from the project.

His work lies at the intersection of the concrete and the abstract, using technical tools and processes to create evocative and cinematic soundscapes.

Bandcamp Daily  your guide to the world of Bandcamp